Quieter excavators are designed to limit noise exposure from loud equipment engines by enclosing the operator and the engine.

Quieter excavators use engineering controls to limit noise operator exposure. Excavators use powerful diesel engines to move large amounts of earth and these quieter machines are designed to reduce the amount of noise from the engine that reaches the operator. Through the use of quieter engines and specially designed enclosures for the excavator operator and diesel engine, the sound level in the cabin is reduced.

Through the use of specially designed cabin and engine enclosures, the noise produced by the excavator engines is mitigated and exposures are reduced. However, sound pressure levels outside the cabin and on the construction site may still result in exposures that are above the OSHA permissible exposure limit, depending on the duration of exposure. Workers should wear hearing protection for more than intermittent visits. 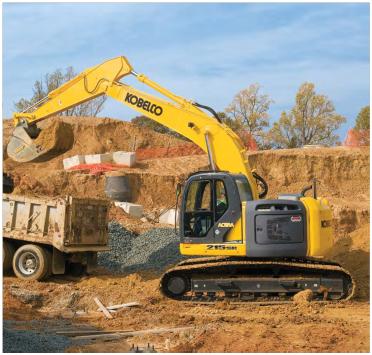 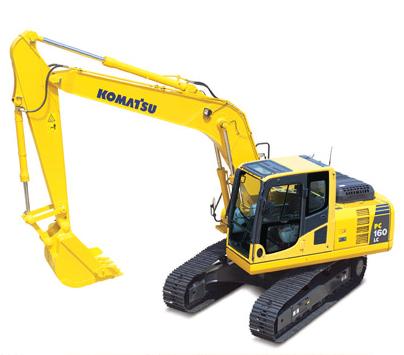 Over time, exposure to noise levels at or above 85 decibels will lead to permanent hearing loss. The NIOSH recommended exposure limit (REL) for occupational noise is 85 decibels on an A-weighted scale as an 8-hour time weighted average. OSHA limits noise exposure to 90 decibels, also on an A-weighted scale and as an 8-hour time weighted average (U.S. Department of Health and Human Services, 1998). A-weighting is an adjustment that gives lower frequencies less weight or significance than higher frequencies.  An A-weighted sound level more closely resembles the human ear’s response to noise.

Noise exposure has also been associated with temporary hearing loss, decreased perception of noisiness and masking, increased stress, fatigue, disturbance of sleep and decreased concentration and mental performance (Osada, 1988).  Noise-induced hearing loss starts in the higher frequencies (3,000 to 6,000 Hz) and slowly develops from chronic exposure to excessive sound. Sound must exert a shearing force on the hair cells lining in order to be perceived, and if the force is too strong, cell damage and cell death can occur (Berger et al., 2003).

The National Institute of Occupational Safety and Health (NIOSH) conducted a survey of potentially hazardous noise sources associated with heavy construction equipment. Time-weighted aveage noise exposures for operators of four different excavators ranged from 75-78 dBA. The tests were done over eight or more hours with the excavators performing various activities on the jobsite (Spencer, CDC).

In a 2004 report from the University of Washington, Seixas and Neitzel indicated an average full-shift noise dosimetry measurements of 90 dBA for excavators used by operating engineers.  In a 2002 study of forestry workers, Neitzel and Yost reported a mean operator exposure of 86 dBA during 1,149 one-minute noise readings collected during the operation of excavators. In a 1999 study of construction workers Neitzel et al. reported a mean of 80 dBA for one-minute operator noise readings in the cab of a tracked excavator cab that was enclosed in glass on three sides.

In a study of 31 excavators, or power shovels, operators, Legris and Poulin found 8-hour time weighted averages between 80 and 93 dBA, mean 87 dBA.

A survey was conducted in order to determine all the sources of noise within a mine, including excavators. Most of the noise from the earth mover came from the auxiliary or booster fan located on the outside of the equipment in order to keep the engine cool. Measurement indicated a sound pressure level of 84 dBA produced by the machine (Tripathy, 1999).

These diesel-powered machines move large amounts of earth and are designed to reduce the amount of noise from the engine that reaches the operator. Other controls designed to limit noise exposure include re-designed cooling systems and vibration absorption cabin mounts. Through the use of specially designed enclosures for the excavator operator and the engine, sound exposure is reduced.

While there is no published sampling data on these specific controls, evidence indicates exposure to noise can be significantly reduced through the use of noise control techniques. The extent of the reduction is dependent on the type of work being performed, the size of the engine, the amount of noise in the environment, the machine, the level of effort required by the machine, and the operator’s proximity to the engine.

Industrial hygienists use sound level meters or noise dosimeters to determine noise levels and recommend the use of quieter techniques to prevent hearing loss and reduce the risk of accidents. Proper maintenance and retrofitting existing equipment can decrease excess sound as well (Suter, 2002).

Bobcat states that its quieter cab reduces sound levels by more than 50%.

Lower noise levels are expected to reduce stress and fatigue, and increase the concentration and mental performance of workers. Improved worker health, comfort and concentration may lead to greater productivity. Reduced sound levels can also lower the risk of accidents as communication among workers is easier and more effective.

NIOSH Workplace Solutions Sheet
The National Institute of Safety and Health (NIOSH) has published a series of “Workplace Solutions”, which are easy-to-understand recommendations from NIOSH research results. Related to this Construction Solution, please find more information on: Preventing Injuries When Working with Hydraulic Excavators and Backhoe Loaders