Respirators with APF 50, when properly fitted and used, reduce the inhalation of airborne contaminants.

Exposure to airborne dust, silica, asbestos, and chemical vapors can lead to a variety of diseases and even death.  Respirators, when properly fitted and used, reduce the inhalation of airborne contaminants, including engineered nanomaterials. When engineering controls, administrative controls, and good work practices have been used to reduce the extent of the hazards on a jobsite, respirators can provide additional reduction of risk. This solution focuses on NIOSH-approved negative pressure air-purifying respirators (APR) with full facepieces.  These respirators have an assigned protection factor (APF) of 50.  Half face powered air-purifying respirators, negative pressure supplied air respirators, and negative pressure self-contained breathing apparatuses also have an APF of 50 but are not covered in this solution.

Respirators should be cleaned and inspected daily to ensure proper fit and function, with attention paid to checking particulate filters for breaks. 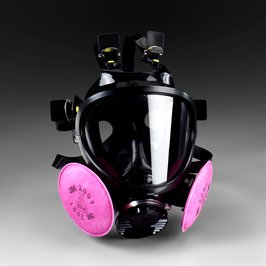 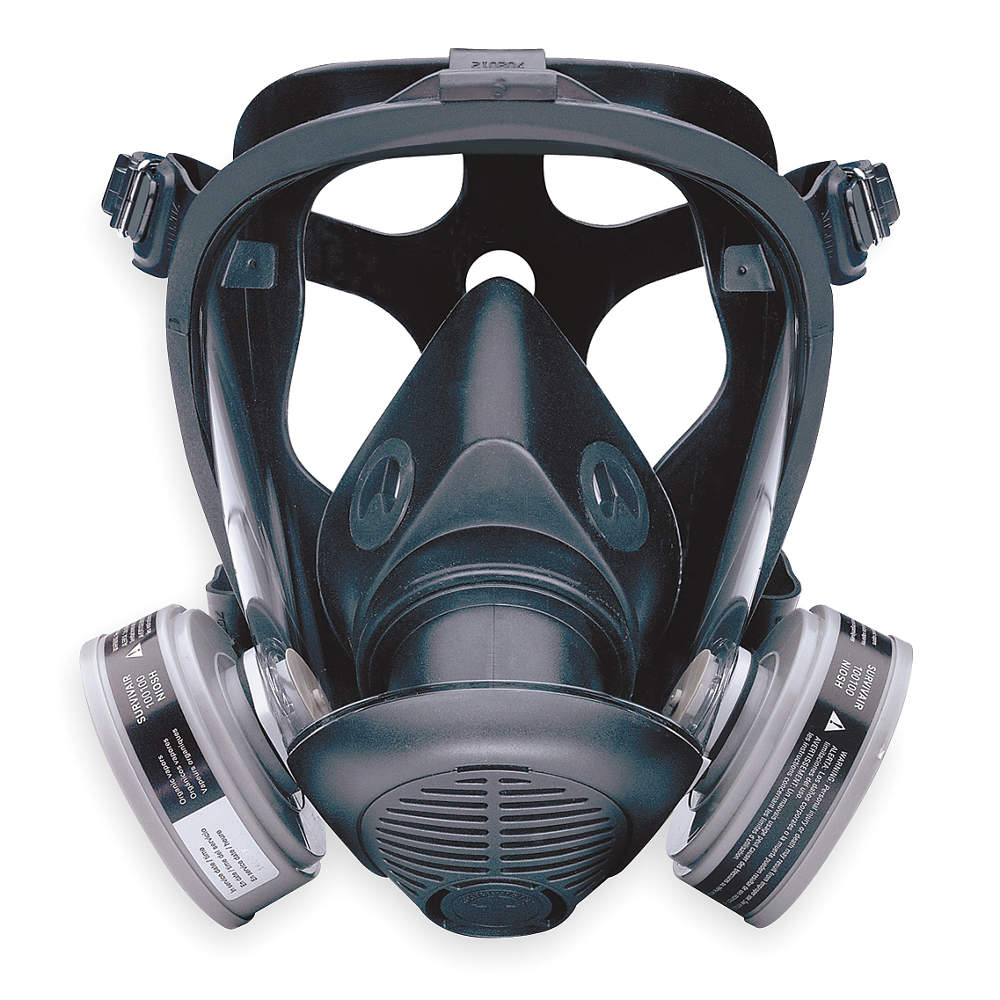 Chronic silica inhalation has been linked to an increased risk for multiple types of cancer, COPD, and silicosis. Increasingly, nano-enabled construction products are being used in construction that can also expose workers to inhaling engineered nanomaterials when the products are being disturbed, such as cutting concrete roofing tiles that contain nano-size titanium dioxide. Inhalation of ultrafine titanium dioxide particles may increase the risk of workers developing lung cancer and other respiratory diseases (NIOSH, 2011). APRs, when properly used, can effectively reduce the inhalation of silica and other particulates. APRs do not provide breathing air and must not be used in oxygen-deficient or immediately dangerous to life and health (IDLH) environments, which may include confined spaces.

In a construction setting, workers are most often exposed to nuisance, wood, and silica dusts. Exposure to these can cause pulmonary illnesses, and silica dust exposure can lead to silicosis and cancer. All construction dust acts as an irritant to nasal, throat, and lung tissues, resulting in reduced respiratory capacity. Chronic exposure leads to a heightened risk for respiratory infections, bronchitis, pneumonia, tuberculosis, COPD, and cancer. With the increasing use of nano-enabled construction materials, workers can also expect to have an increased likelihood of being exposed to engineered nanomaterials along with silica and other construction dust. While there is no evidence yet that engineered nanomaterials cause harm in humans, animal studies have demonstrated that some engineered nanomaterials, such as titanium dioxide and carbon nanotubes, can cause adverse effects on the lungs, including lung cancer (NIOSH, 2011; NIOSH, 2013).

Silicosis occurs when inhaled silica dust causes scarring of the lungs causing difficulty breathing. This painfully restricts breathing, and can cause fluid retention in the lungs. Silicosis is not restricted to people with chronic exposure. Short-term exposure to very high levels of silica dust can cause acute silicosis, which can be fatal within months. In construction products that contain both silica and an engineered nanomaterial like titanium dioxide, workers are most likely exposed to far more risk of harm to their health from exposure to silica than the health risk resulting from exposure to the engineered nanomaterial. That means that selection of the appropriate form of respiratory protection that effectively protects workers from the risk of silica will be sufficient to also protect workers from any health risks that may be associated with exposure to the engineered nanomaterial.

Airborne toxic dusts, mists, vapors, and fumes can cause illness or death. Gases, vapors, and fumes can reduce oxygen levels by replacement, impair judgment, and present an immediate danger to life and health. Air-purifying respirators (APRs) filter contaminants from the air but do not provide breathing air and must not be used in oxygen-deficient or immediately dangerous to life and health environments, which may include confined spaces. Additionally, APRs are not reliably effective against some gases, including carbon monoxide. APRs, when properly used, can effectively reduce the inhalation of dust, silica, asbestos, lead, and other particulates, including engineered nanomaterials.

APRs work by filtering particles from the air or chemically purifying the air. APRs and filters are independently certified by the National Personal Protective Technology Laboratory (NPPTL) at NIOSH. These results have been verified independently in multiple peer reviewed journal articles, and the U.S. Army Research, Development, and Engineering Command. N95 and P100 filters are certified to remove 95% and 99.97%, respectively, of 0.3 µm (300 nm) particles. The Army nanoparticle research has shown effectiveness at sizes down to 50 nm. This is significant for construction applications because it shows that proper use of respirators can significantly reduce exposure to airborne particles of any size on a job site. NIOSH has also confirmed that particulate filtering respirators are effective in capturing particles in the size range of engineered nanomaterials so that these respirators will work to reduce inhalation when exposed to airborne nanoparticles.

A simulated workplace protection factor study conducted by NIOSH has shown that elastomeric half mask and filtering facepiece respirators equipped with P100 filters provide a higher level of protection against exposures to nanoparticles than elastomeric half masks and filtering facepiece respirators with N95 filters (Vo et al. 2015; Zhuang et al. 2015). This finding supports the NIOSH and OSHA recommendation that N100 or P100 filters be used when workers are exposed to high levels of airborne engineered nanomaterials.  No simulated workplace protection factor studies have been conducted against exposure to nanoparticles using an elastomeric full facepiece APR equipped with N100 or P100 filters with an assigned protection factor of 50.  However, the NIOSH evidence that elastomeric half mask respirators with an APF of 10 are effective against nanoparticles provides a strong indication that full face APR’s using 100-class filters would also be effective in protecting workers against inhaling nanoparticles.

Respirator use has been found to impede physical effort, especially fine motor skills, and can impair cognitive functions.

Engineered nanoparticles are very small, in the range of 1 to 100 nanometers. Both N95 and N100 or P100 filters perform as expected: penetrations of nanoparticles through the filter are below 5% for N95 and below 0.03% for N100 or P100 filters (Rengasamy et al., 2009).  However, N95 filters do not perform as well against nanoparticles as P100s due to the difference in filtering media. N95s use an electrostatic charge to trap particles which is more effective in capturing particles larger than nanoparticles, while N100s and P100s create a physical barrier that is more effective in capturing small particles in the nanoparticle size range (Balazy et al., 2006 and Rengasamy and Eimer, 2012, Rengasamy et al, 2013).