Workers that operate earth-moving equipment may face hazards from collapse.

Workers who dig or excavate trenches are at risk of death if they enter an unprotected trench and the walls collapse.  There is no reliable warning when a trench fails.  Even though small amounts of dirt may not seem treacherous, a single cubic yard of dirt can weigh more than 3,000 pounds, which can fatally crush or suffocate workers (Deatherage et al. 2004).  There are four common types of trench collapse hazards: (1) the spoil pile slide, (2) the shear wall collapse, (3) the belly slough, and (4) the slip slide.

Spoil Pile slides (figure 1) are very common and occur when dirt is piled too close to the edge of the trench.  Usually this type of hazard does not cause serious injury initially, but care must be taken during the rescue to avoid causing a more serious collapse of the trench wall. 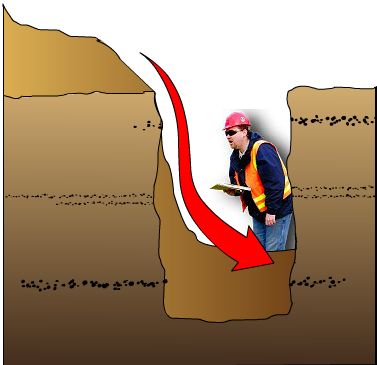 Shear wall collapses (figure 2) occur most frequently in clay or layered soil.  They are deadly, happen very quickly, and usually cause death or very serious injury to the victim.   An average collapse is about 2-3 yards of soil and weights approximately 5,400 - 8,100 pounds.

The lip slides (figure 3) are similar to the shear wall collapse, but is smaller and less severe.  These occur when placing the spoil pile too close to the trench.  Weight from the spoil pile, rain, or vibration from equipment and vehicles traveling nearby can cause the lip to fracture and allow the spoil pile to slide into the trench, trapping the victim.

The belly slough (figure 4) occur in areas near underground utilities or where running water is present in the trench.  Often, a fracture line will appear as an indicator near the bottom wall of the trench signaling an impending collapse.  This type of collapse is rapid and usually buries the victim deeply, and likely to suffocate the victim.

OSHA breaks down soil types into three groups: A, B, and C. However, the mineral composition of the soil is not the only factor. Absorbed water in the soil helps determine whether it is a cohesive soil, that is, holding together and being pliable or plastic. The presence of clay in a soil also contributes to the cohesiveness. So, if you put a soil into group A, for example, it may change as it dries out or gets wetter and may be re-classified as type B or C.  Therefore, when a competent person classifies a soil, you are really classifying both the soil and the environment it's in at the time it is tested.

Type A: cohesive soils with an unconfined compressive strength of 1.5 tons per square foot (tsf) or greater.

Type B: cohesive soils with an unconfined compressive strength greater than 0.5 tsf but less than 1.5 tsf.

Type C: cohesive soils with an unconfined compressive strength of 0.5 tsf or less.

The OSHA standard for excavation and trenching, known as 29 CFR 1926 Subpart P, describes teh precautions needed for safe excavation work.

Leading Causes of Fatal and Nonfatal Injuries in Construction

Shoring equipment is designed to stabilize and provide structure for trenches when work must be completed below earth’s surface.

Trench boxes are designed to protect workers from cave-ins when work must be completed below the earth’s surface.

Job hazard analysis (JHA), also known as job safety analysis and activity hazard analysis, is a process in construction project planning that aims to proactively identify the steps in a task, assess the risk level of each step, and assign appropriate action to control the risk.