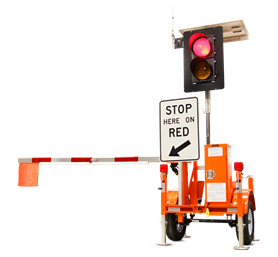 AFADs are remote-controlled equipment designed to be operated by a flagger positioned outside of the travel lanes in a work zone.

AFADs are remote-controlled equipment designed to be operated by a flagger positioned outside of the travel lanes in a work zone.  They function under the same operational principles as traditional flagging.

The 2009 Manual on Uniform Traffic Control Devices (MUTCD), published by the Federal Highway Administration, defines the standards used by road managers nationwide to install and maintain traffic control devices.  There are two types of AFADs recognized.  The first type uses a remote-controlled STOP/SLOW sign mounted on a trailer cart and the second type uses a remote-controlled red and yellow lens and a gate arm to alternately control right-of-way (figure 1).

The MUTCD standard also provides the following factors to consider when using AFADs:

AFADs should not be used for long-term stationary work.  They are typically used for short-term or intermediate-term lane or road closures such as bridge maintenance, haul road crossings, guardrail repair, and pavement patching.

AFADs should only be used in situations where there is only one lane of approaching traffic in the direction to be controlled.  The maximum distance between two AFADs controlling opposing directions of traffic should be 1,500 feet, unless a longer distance is justified by an engineering study.

AFADs should be placed so that all of the signs and other items controlling traffic movement are readily visible to the driver of the intial approaching vehicle with advance warning signs alerting other approaching traffic to be prepared to stop.

AFADs increases worker safety compared to traditional flagging methods.  AFADs minimize flaggers' direct exposure to traffic by allowing them to control the flagging device from an area away from traffic, such as behind a work zone barricade.

AFADs do no eliminate the need for qualified flaggers at the work zone.  Workers should be traditionally trained and certified to operate the devices correctly to manually direct traffic in case of a technology malfunction, or driver intrusion.  The National Work Zone Safety Information Clearinghouse has a table of flagger training and certification requirements by state: https://www.workzonesafety.org/training/flagger_training

All AFAD applications must abide by the specific standards set forth in the MUTCD.  In accordance with NCHRP Report 350 and AASHTO's Manual for Assessing Safety Hardware, the AFAD must satisfy applicable crashworthiness standards based on device weight.  Detailed specifications for stop/slow AFAD are provided in section 6e.05; similarly, detailed specifications for red/yellow AFDs are listed in section 6e.06.

Motorists may misunderstand AFADs and enter the lane closure under the STOP condition.  Thus, it is recommended a gate arm should be required for STOP/SLOW AFADs.