Solution Summary: Monitoring the Atmosphere in a Confined Space 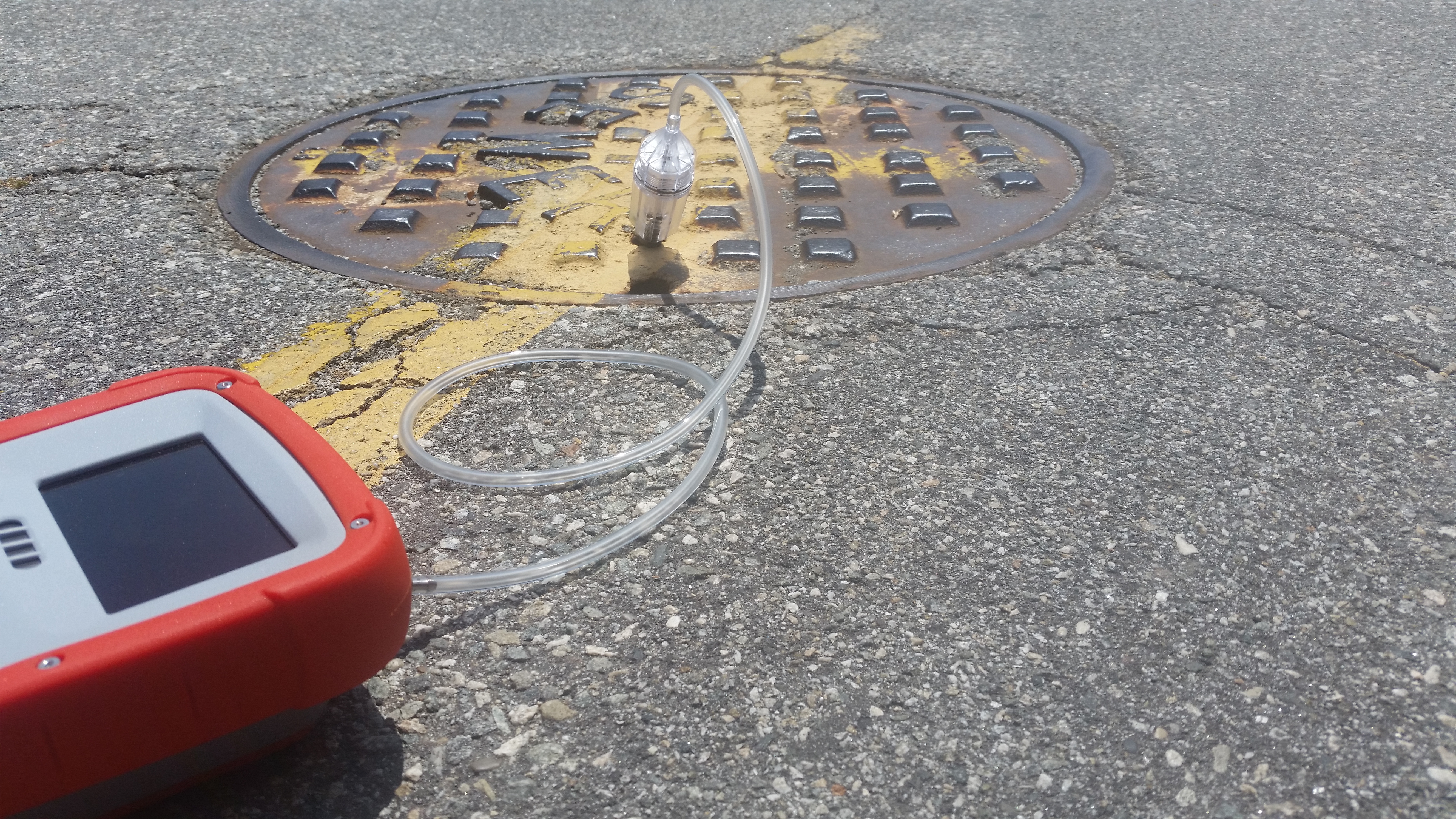 General information on how to monitor for a hazardous atmosphere in a confined space.

Monitoring atmospheric hazards using direct-reading instruments is the first and most critical step for confined space safety.  Oxygen deficiency or enrichment should be monitored first.  Next, explosive gases, vapors, and dust need to be monitored.  Last, toxic gases and vapors are monitored.  This order is critical because explosive gas monitors may not provide accurate readings if the oxygen level is too low. Before entering any confined spaces, it is important to monitor the air, ventilate if necessary, and continue to monitor as long as an entrant is working inside.

The accepted levels for the three main atmospheric hazards (that should be monitored in the following order) are:

This isn’t just good practice. OSHA requires it in its recent standard on confined entry in construction:

“Before an employee enters the space, the internal atmosphere must be tested, with a calibrated direct-reading instrument, for oxygen content, for flammable gases and vapors, and for potential toxic air contaminants, in that order. Any employee who enters the space, or that employee's authorized representative, must be provided an opportunity to observe the pre-entry testing required by this paragraph.” 1926.1203(e)(2)(iii)

The air monitors used to test the air in confined spaces are called "direct-reading instruments" because they “read” an air sample. Air monitors test for oxygen. They also test for explosive and toxic gases and vapors.  Only the following gases and vapors can be specifically detected by chemical-specific sensors:


If a confined space contains one of the chemicals listed above, a sensor can be used to detect that chemical. A hydrogen sulfide sensor, however, will not detect solvent vapors from thinners or glues. When dealing with unknown chemicals, it is better to use a non-specific sensor which is sensitive to small amounts of toxic gases and vapors.

It is important to note that not all direct-reading instruments are universally appropriate for any confined spaces.  Please refer to the sample of manufacturer links under 'Availability' to view the various specifications for the appropriate confined space.

How to Monitor in a Confined Space

Always monitor the inside of a confined space from outside of the space by collecting the air sample through a sampling probe inserted into the space.  A probe is a long, hollow, narrow tube connected to the inlet of the monitor (Figure 1).  To obtain a sample, keep the cover to the space enclosed so that the hazardous air inside the space does not mix with the outside air and to avoid a potential ignition of flammable gases.

Figure 1.  A sampling probe connected to an air monitor. (Photo courtesy of HazSim)

Some air monitors draw a sample with a motorized or hand-activated pump.  Others allow the air to passively move across the sensor, also known as "passive diffusion."

If the initial test readings indicate the air is within safe limits, remove the cover to the space and begin sampling vertically every four feet (Figure 2).  Some monitors require some time to fully respond.  To be safe, allow at least two to three minutes for a full response.  The vapor density of a chemical generally determines where it can be found in a confined space.  Sampling every four feet ensures that you will detect all the gases and vapors which accumulate at different levels within the space. 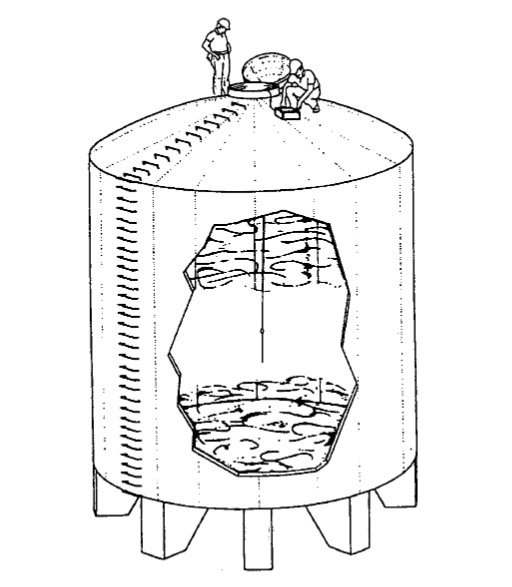 Figure 2.  Always monitor the air at different levels or layers within the confined space. (Photo courtesy of CPWR)

To help direct the sampling probe, attach it to a long, sturdy pole. Sample each vertical layer horizontally within a radius of six feet (space permitting) slowly and carefully as the air within a confined space may be unevenly mixed. Hazardous gases may exist within several feet of an area that reads safe.  Since the air within a confined space can change quickly, it is recommended that you monitor continuously while you are in the space because sensors in direct-reading monitors take time to respond fully. When sampling air requiring more than 10 feet deep of the sample line, the instrument needs more time to respond.

Monitors (Figure 3) can be worn on a belt or in an outside shirt or pocket. If possible, tubing should be near the entrant’s breathing zone to measure the content of the air the entrant is actually breathing. 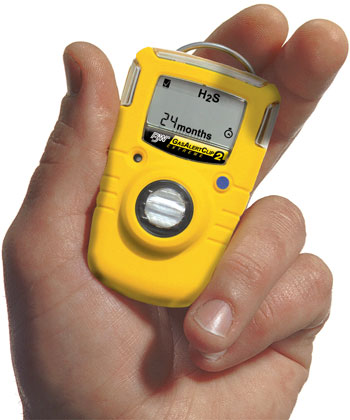 Electrochemical Cells
Electrochemical cells detect oxygen and a small number of other specific chemicals, including carbon monoxide and hydrogen sulfide.  They may respond to gases for which they were not intended, resulting in false readings.

Broad-Band Sensors
Broad-band sensors are non-specific detectors which respond to explosive and toxic gases and vapors. These sensors are good screening tools for detecting toxic chemicals in confined spaces.

It is important to note that sensors cannot reliably detect the presence of combustible dust, and are not a substitute for a hazardous dust inspection and control program.

Detector tubes, which can measure approximately 200 different substances, can be used to detect the presence of toxic gases or vapors in confined spaces. However, to use a detector tube you must know the specific gas or vapor that you are testing for (figure 3).  If you use detector tubes to sample a confined space, always check to make sure that:

The accuracy of detector tubes, which can be off by as much as 25%, is affected by temperature, humidity, pressure, and the presence of other chemicals.

Although a hazardous atmosphere itself can remain or arise during work in a confined space, monitoring the air to alert entrants of a hazardous atmosphere prior to entry or as it happens by way of alarm signals (audible and visual) from properly calibrated direct-reading instruments can help personnel determine proper safety operational procedures; this in turn can help reduce the risk of exposure.  To ensure effective hazardous atmosphere monitoring, alarm points should be set at 19.5% and 23.5% for oxygen, 10% of the Lower Explosive Limit (LEL) for the gas or vapor, and the amount of the Permissible Exposure Limits (PEL) or Threshold Limit Values (TLV) in parts per million for the specific chemical sensors.

This solution page was adapted from the CPWR Confined Space Instructor Manual 2006.