Temporary traffic control devices (TTCD) provide for the reasonably safe and effective movement of road users through work zones; protect workers performing the many varied tasks within the work space, as well as road users and equipment; and improve mobility by minimizing congestion and community impact.

The use of a temporary traffic control device (TTCD) as a safety precaution is a proven and effective way of reducing struck-by injuries and fatalities in work zones by diverting traffic away from work zones. TTCDs use high-visibility equipment as delineators to warn and guide road users through the work zone. All reflective fluorescent orange sheeting used on TTCDs must meet ASTM D 4956 standards.

Drums: Plastic work-zone drums are a commonly used TTCD for traffic diversion and vehicle restriction. Typically, drums are manufactured in a lightweight, deformable, and high-durability plastic material with a non-metallic, high-visibility orange finish, with reflective sheeting strips horizontally oriented for increased visibility at night. Most state departments of transportation require reflective sheeting to meet the ASTM D 4956 standard (please see Table 1 under "Additional Considerations"). Drums should have a minimum of three orange and two white reflectorized stripes. They are portable enough to be moved from place to place within the work zone to accommodate any changing conditions. Work-zone drums are equipped with a removable base for stability. The base can be fastened to the road pavement in long-term work situations. Drums can be used as a preliminary warning to motorists or as a channelizing/delineation device for motorists entering or leaving a work zone. Drums must not be filled with sand, water, or any other material since this would make them hazardous to workers and road users when struck.

Barricades: Barricades are used to completely restrict vehicles from entering a work zone. They consist of one or more rails of alternating reflective material and fluorescent orange, meeting ASTM D 4956 specifications (MoDOT 2016; Table 1). Barricades are classified as Type I, Type II, or Type III.

Type I is appropriate for use on conventional roads and urban streets; however, types II and III can be used on freeways and other high-speed roadways. Barricades are to be used as a means of closing a road or restricting motorist traffic to a section of the right of way. Barricades may be weighed down by any deformable ballast, such as sandbags. It should be noted that barricades are subject to vehicle collision and should be supported accordingly.

Direction Indicator Barricade: Direction indicator barricades increase convenience to motorists through visual redirection indicated by an arrow. A direction indicator barricade consists of two rails, one consisting of alternating reflective material and fluorescent orange color, meeting ASTM D 4956 specifications (Table 1). The top rail must be 12 inches (1 foot) in height and include a directional arrow to direct traffic away from the work zone. Finish requirements for the top rail are much less stringent than for the bottom reflective rail. Direction indicators can be used as a means of channeling/delineation, as well as a means of diverting traffic away from a lane by tapering the motorists into a single lane. 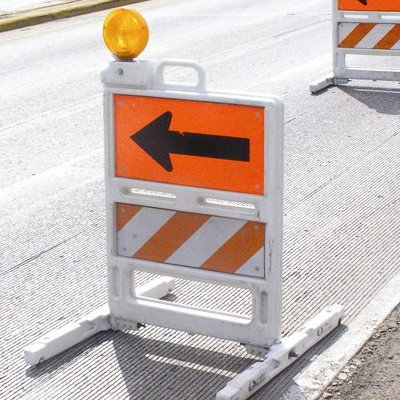 Here is the summary of application areas for all temporary traffic control devices:

Working on road construction sites increases risk of work zone struck-by injuries and fatalities. Road maintenance operations occur in close proximity to traffic and create potentially hazardous situations for both workers who are working in the work zone and road users. Among fatalities involving vehicles and heavy equipment at road construction sites, most involved workers on foot or non-passengers who were struck by vehicles or heavy equipment in the work zone or by passing vehicles that entered the work zone. The National Highway Traffic Safety Administration (NHTSA) reported that in 2010 in the U.S, 576 of the 32,885 vehicle crashes that involved fatalities (1.8%) occurred in construction work zones (NHTSA 2010).

To investigate more recent data from 2011 to 2015 (the latest data available) statistics were collected from the Census of Fatal Occupational Injuries (CFOI) provided by the Bureau of Labor Statistics (BLS). In this five-year period, 1,111 transportation-related fatalities happened in the construction industry, involving  aircraft, rail vehicles, animal and other non-motorized vehicle transportation, water vehicles, and pedestrian vehicular incidents. Among these, 319 incidents occurred in the pedestrian vehicular category, involving pedestrians who were struck by a vehicle in work zones. More specifically, 175 pedestrians (i.e., construction workers) died following struck-by-vehicle accidents on construction job sites between 2011 and 2015. This represents 64% of all fatalities of this kind in all industries in the United States. Federal Highway Administration also reported that on average, every 5.4 minutes, a work zone crashes occurred in 2015.  In terms of severity, 73.0% were property damage only, 26.4 % involved an injured party, and 0.7% involved a fatality.

TTC devices can reduce the risk of work zone struck-by injuries by separating the workers from traffic and restricting vehicles from entering a work zone.

In a work zone, there are five “levels” of separation: the advance warning area, the transition area, the buffer space, the work area, and the termination area. The advance warning area signals to motorists that there is an upcoming work zone. In the advance warning area, the use of drums, cones, or tubular markers (when appropriate) is encouraged. The transition area begins the delineation of motorists and traffic away from ongoing work. In the transition area, the use of drums, cones, tubular markers, direction indicator barricades, and/or vertical panels would be appropriate. The buffer space is an area where motorists are settling into the new flow of traffic to be taken through the work zone. The buffer space could contain any and all of the TTCDs described here and would be a very appropriate location for barricades of any type. The work area is the space in which the actual roadway or bridge construction is being completed. In the work area, barricades could be used to indicate the location in which the work is physically beginning. The termination area is the effective end of the work zone. In the termination area, drums, cones, or direction indicator barriers could be used as a means of guiding motorists back to the general flow of traffic. TTCDs provide the general delineation for the flow of traffic through these areas, as well as a barrier between traffic and workers.

TTCDs are used to reduce the risk of struck-by injuries and fatalities in roadway work zones by using first warning signs through last traffic control devices where the traffic returns to its normal condition. TTCDs warn road users of potential hazards, advise them to appropriate changes in path through the work zone, and separate the road users from workers who are working in the work zone. TTCDs also address the secondary risk of motorist injuries due to speeding through a work zone, because the high-visibility equipment inadvertently signals drivers to slow down.

The goals of any employer should be to not only complete the project in a timely and satisfactory manner, but to also reduce injuries and prevent fatalities. In the case of a fatality, federal regulatory agencies may halt all work pending an investigation. TTCDs are much quicker to deploy compared to some barriers that require heavy equipment for lifting and installing. These devices help to reduce fatalities and keep work from slowing down.

The minimum coefficient of retro-reflectivity specifications can be found in Table 1.

*Listed above are the allowable specifications for fluorescent orange sheeting to be used for TTCDs as required by the Federal Highway Administration.