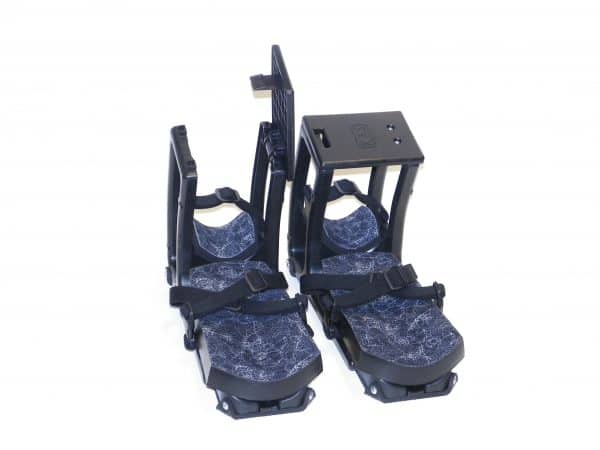 Knee guards with a built-in seat is a kneepad with an attached seat to sit on during kneeling.

Knee guards with a built-in seat is an engineering control that may help reduce stress on the knees, shins, and ankles during kneeling.  The knee guards have rigid plastic shin guards that extends down each leg.  The knee guards and shin guards evenly distributes body weight, thereby reducing the amount of pressure on the knees and shins compared to traditional kneeling.  Additionally, removable seats can be attached to the end of each shin guard so workers can sit.

The kneepad is made of ¾ inch EVA foam pad attached to high impact polycarbonate plastic.  A quick-release hook and loop strap fixes the pad on to the knee.  The kneepads can be used independently or they can be attached to shin guards and/or the Kraft Seat.

The shin guard (Figure 2) features two adjustable lightweight ABS plastic rods that are on both sides of the shin.  The end of the shin guard has a pad for the front of the ankle (Figure 3).  The ankle pad is secured to the lower leg with a quick release hook and loop strap, allowing the worker to walk with the shin guards on.  When kneeling, the plastic rods and ankle pad evenly distribute the body weight, which reduces pressure on the knees, shins, and ankles.

The Kraft Seat attaches to the shin guards and extends behind the ankle approximately 8-10 inches (Figure 4).  Each leg has a seat for the worker to sit on while kneeling.  The Kraft seat weighs less than 2 lb and can be worn while walking.

Continuous kneeling can lead to numerous musculoskeletal disorders (MSDs) of the knee and ankle.  A prolonged kneeling position can cause prepatellar bursitis (housemaid’s knee), causing swelling and pain in the front of the knee.  Prolonged kneeling can also cause osteoarthritis of the knee which is a deterioration of the cartilage between knee joints.  Sitting on the ankles while kneeling can cause excessive pressure on the ankle, which may result in pain and loss of function.  Knee guards with built-in seats can help reduce excessive pressure on the knees, shins, and ankles by evenly distributing body weight on the kneepads, shin guards, and seat.

Kneeling causes pressure directly on the kneecap.  This small contact area may cause MSDs.  Knee guards with a built-in seat increases contact area by distributing pressure throughout the knees, shins, and ankles.

Knee guards with a built-in seat allows workers to sit comfortably rather than on their ankles.  Sitting on the ankles causes excessive pressure through the ankle joint, which can result in pain and stiffness.

The manufacturer states, “No other knee pads on the market offer the protection of the K2S knee protection system…  The Kraft Seat allows you to transfer your weight to its patented seat, rather than to your knees, your shins, and your ankles.”

The K2S Kraft Seat has no effect on productivity.