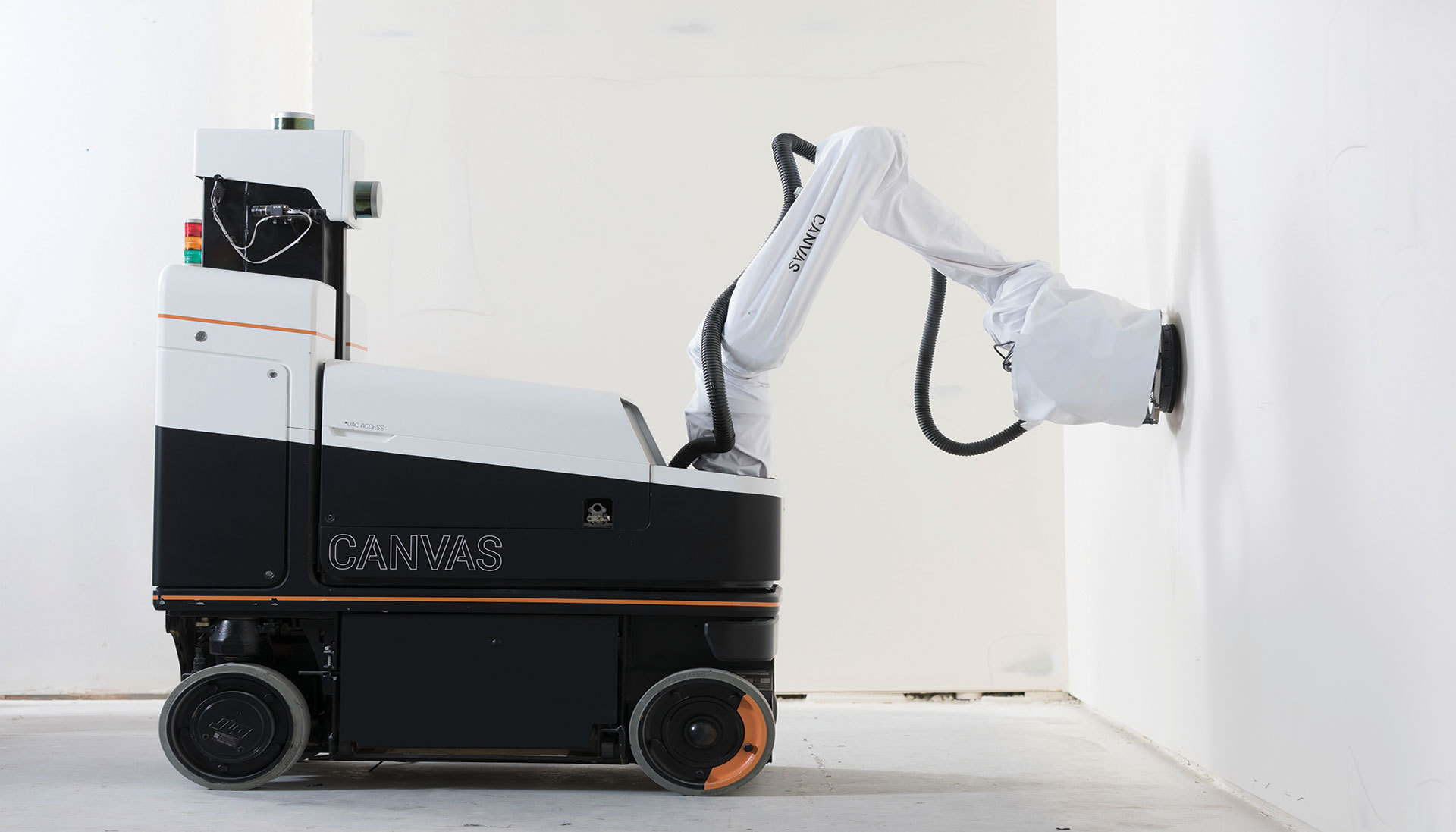 A robot that can perform mudding and sanding of drywall autonomously without exposing workers to health and safety risks from manual drywall finishing.

Finishing drywall can be a repetitive task that can raise the risk of ergonomic injury, falls when working at height, as well as generate large amounts of dust that may contain high levels of contaminants, including crystalline silica, creating a health hazard for everyone in the vicinity. An autonomous drywall finishing robot is an engineering control that automatically performs mudding and sanding after it scans and 3D maps the surface areas to be worked on. It eliminates potential exposures to the hazards of falls from elevation, ergonomic stressors and airborne contaminants associated with traditional drywall finishing.

Manual drywall finishing can create risks to hazards from strenuous repetitive motions, working at height, and exposure to airborne fine particulates. An autonomous drywall finishing robot, such as the Canvas (figure 1), automates the mudding, taping, and sanding portions of the drywall finishing process. It is a robot that features a sprayer, lift station, telescopic mechanical arm, and vacuum sanding system. The arm contains an image sensor that first generates a 3D map of the surface. Those spatial data are then calculated to provide an optimum drywall finishing process with a single sprayed coat and sanding pass for the job. This robotic system can be operated at a distance by a remote, which requires manufacturer training (figure 2).

Using scissor lifts, ladders, or rolling scaffolds during drywall finishing can increase the chance of a fall leading to an injury or even death. Fractures are the most common injuries associated with falling from a ladder, followed by strains, sprains, and abrasions.

Typically, drywall seams are covered from floor to ceiling, which can lead to work on mobile scissor lifts, ladders, or rolling scaffolds raising the risk of ergonomic injury. The Canvas allows workers to pilot Canvas up to 17 feet high eliminating the need for workers to use ladders, scissor lifts, or scaffolds.

According to the manufacturer, the Canvas captures 99.9% of the dust produced by sanding as well as minimize cleanup, thereby reducing worker exposure to respirable crystalline silica. Canvas also helps make the work ergonomically safer by eliminating heavy lifting of a sanding machine, awkward positions during drywall installation, and stress injuries from repetitive physical activity.

Per the manufacturer, the Canvas robotic provides high-quality finishes every time and reduces the typical finishing cycle times from seven days down to two.

As with any construction tools and equipment, users should follow the manufacturer's safety recommendations and comply with any applicable local, state or federal regulations.

While most of the work is done autonomously, workers should be aware of the distance between them and the robot to avoid catching and dragging-related risks. Workers (end-users) should be trained to detect system malfunction that may lead to accidents.