Workers that weld, braze and solder seams and joints may face hazards from awkward neck postures.

Neck pain is among the most common health complaints in working-aged populations worldwide.  Studies from Canada, the United Kingdom, and the Netherlands have shown the annual incidence of new neck pain to be as high as 15-18% among working-age adults.  Furthermore, studies have shown that neck pain is persistent and up to 50% adults will have symptoms one year later.  Numerous studies have shown women are at a greater risk for neck pain than men.  Neck pain is characterized by having pain in the soft tissues of the neck and shoulder girdle.  Neck pain can be accompanied by tingling or numbness into the arms, wrists, and hands.
Work-Related Risk Factors
Awkward neck postures may be more harmful if they are combined with the following:
•    Static loading of neck or shoulder muscles
•    Repetitive movements of the shoulder or wrist
•    Awkward trunk postures (bending and twisting)
•    Psychosocial factors including job demand, control over work, support at work, and job strain

The neck is the most mobile and least stable portion of the spine, which makes it susceptible to ligament, muscle, and intervertebral disc injury.  Neck pain can occur from inflammation, trauma, myofascial pain syndrome, intervertebral disc disorders, and osteoarthritis.

The intervertebral disc  is composed of an outer ring of fibers surrounding a sac of gel-like material.  The ring of fibers can be damaged from a sudden stress, such as a fall, or cumulative stress.  When the fibers can no longer contain the fluid, small leaks or bulges (herniations) can occur or the disc may flatten.  Disc problems may lead to a compressed nerve (Figure A). 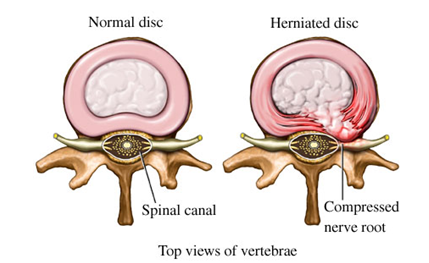 The cause for the majority of episodes of neck pain remains unknown.  Once serious medical problems have been ruled out, patients are seldom given an accurate diagnosis.  Because of the difficulty to diagnose neck problems most are classified as either being related to the disc or to “mechanical neck disorders”.  Mechanical neck disorders are those related to improper movement or function of the neck tissues.

Initial treatment for most episodes of neck pain includes avoidance of stressful activities and use of nonsteroidal anti-inflammatory medications (NSAIDs, e.g. Advil ® or Aleve®).  Medical practitioners will often prescribe stronger drugs (muscle relaxants or narcotics) for more severe, acute pain.  Other treatment options may include application of heat and cold, spinal manipulation, traction, injections, and physical therapy.  Current evidence suggests the most appropriate interventions focus on strengthening the neck and shoulder muscles, and increasing mobility of the spine and surrounding soft tissues.  Some neck pain cases may require surgery (e.g. ruptured disc or severe trauma cases).

Most workers with occupational neck pain get better with minimal treatment.  However, a significant portion of workers will develop chronic neck pain.  At least 42% of workers will miss at least 1 week of work and 37% will still have symptoms after one year.  In the general population, 5% of people with neck pain become disabled.

Several observational methods are available to evaluate the risk of exposure to awkward neck postures.  For individual worker analysis, the most important factors are the amount of time spent in flexed neck postures and the angle of neck flexion.  Typically angles of neck flexion greater than 20 degrees are considered at risk (Figure B).

The Rodger’s Muscle Fatigue Index is also a useful tool to assess exposure to risk factors[DCA1]  involving the neck.  This observation method can be used to assess the amount of fatigue that accumulates in a muscle during 5 minutes of work.  The premise is that fatigued muscles are more susceptible to injury.  Using this tool, a safety manager can assess which tasks are potentially harmful for the neck, and prioritize tasks that could be modified.

The Washington Industrial Safety and Health Act (WISHA) provides a checklist to determine which risk factors are present in work activities.  Included in the checklist is an assessment of neck postures.  According to the checklist, flexion angles of the neck greater than 30 degrees for 2 hours of the day is considered cautionary.  Angles greater than 45 degrees for more than 4 hours a day is considered hazardous.

All three assessment tools above can be accessed at Thomas Bernard’s website:

Job hazard analysis (JHA), also known as job safety analysis and activity hazard analysis, is a process in construction project planning that aims to proactively identify the steps in a task, assess the risk level of each step, and assign appropriate action to control the risk.