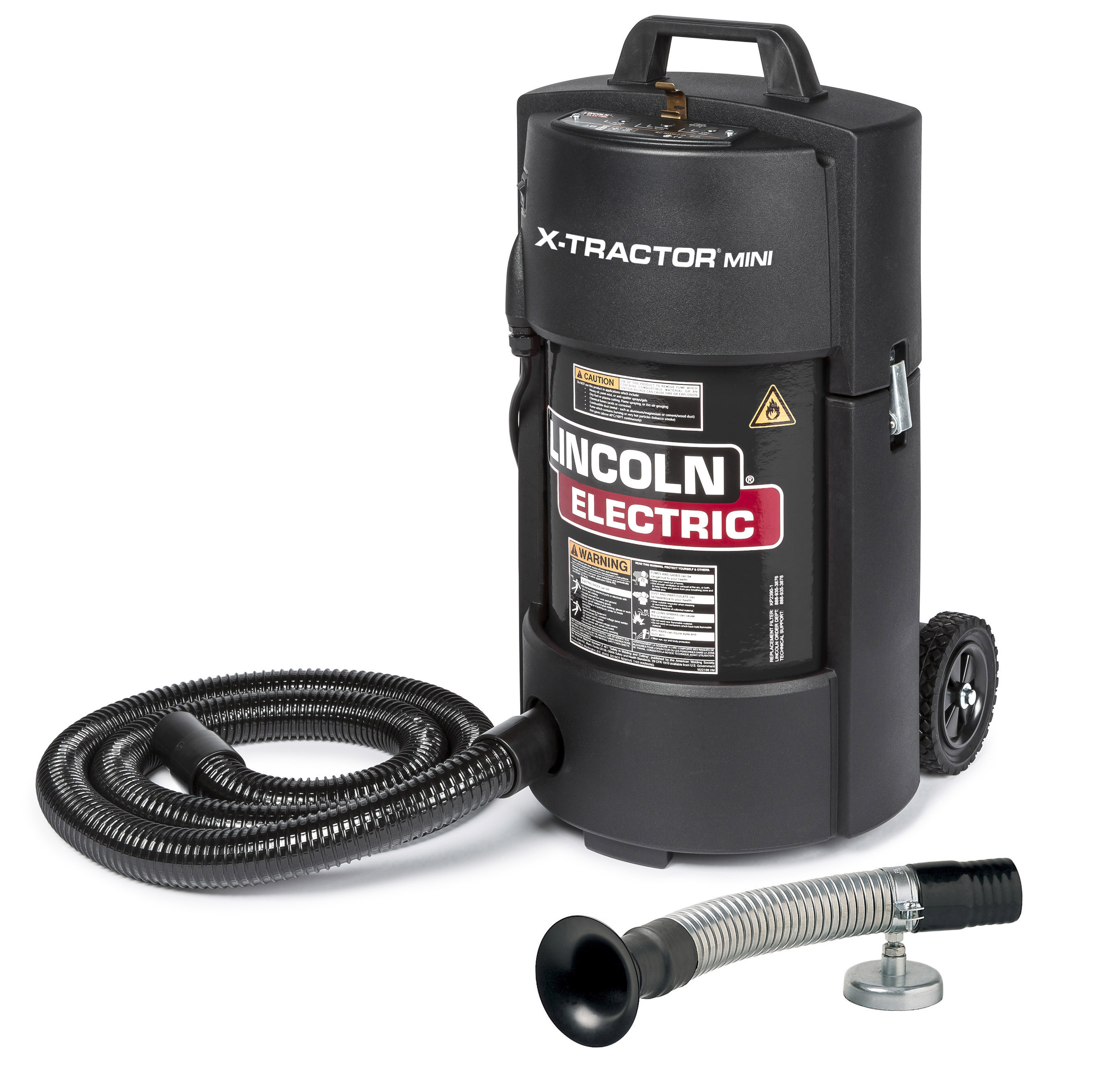 A portable vacuum fume collector with HEPA filtration is a local exhaust ventilation unit that captures contaminants near the source.

A portable vacuum fume collector with HEPA (High Efficiency Particle Air) filtration is an engineering control that can reduce exposure to welding fumes, particles and dust.  Portable vacuum fume collectors use a motor and fan to draw air and contaminants from the point of generation, through a flexible arm or duct and into the unit.  The fumes and particles are then collected on a filter, reducing the concentration in the worker's breathing zone.  These units have HEPA (high efficiency particulate air) filters to provide high collection efficiency of hazardous particles.

A welding fume capture and control system with HEPA filtration may be necessary to meet occupational exposure limits.  HEPA filters capture 99.97% of the most penetrating particles but require pre-filters to extend the life of these denser filters, which are more expensive than other filters.  Portable welding fume control systems also address the constant mobility of welders on construction sites.  A welding ventilation bench hood is the most effective way to remove the hazardous fumes, but portable fume extractors provide a solution where semi-permanent fume hoods are not feasible.

Welding generates fumes that can expose workers to manganese, iron, nickel, hexavalent chromium, and other elements found in the base metal, filler rod and coatings.  These metals have relatively low occupational exposure limits and exposure can lead to serious health effects including lung cancer, Parkinson-like symptoms known as “manganism,” and neurological effects.

NIOSH states that “Recent studies indicate neurological and neurobehavioral deficits may occur when workers are exposed to low levels of manganese (<0.2 mg/m3) in welding fumes. These effects include changes in mood and short-term memory, altered reaction time, and reduced hand-eye coordination.”

Portable vacuum fume extractors with HEPA filtration are used mainly for source capture of welding smoke and fumes.  These units use a motor and fan to draw air and contaminants from the point of generation, through a flexible arm or duct and into the unit.  The fumes and particles are then collected on a high efficiency filter, reducing the concentration in the worker's breathing zone.  As long as the fumes are removed before they are inhaled, the hazard is reduced.

Using fume collectors will visibly remove particulate matter, but the extent that it reduces the small, respirable particles is significant. Although exposure is not reduced to zero, substantial reduction is documented. This is dependent on the amount of air flow through the machine, the distance welding occurs from the machine inlet, how effectively it filters particles in the air, the nature and amount of work and the extent to which workers are exposed to particles that are not captured. While there is little published sampling data on these specific tools, evidence indicates exposure to respirable metal particles can be significantly reduced through the use of fume extraction methods.

Mike Flynn and Pam Susi analyzed 30 years of welding sampling results from OSHA compliance inspections that included 100,000 measurements collected on 30,000 welders from 1978 to 2008. The results indicated that heavy construction and structural steel erection had elevated risks of exposures over the TLV for manganese. Mean values for lead, cadmium, copper, zinc, and hexavalent chrome were over the corresponding OSHA PEL (2013 AIHA conference presentation).

Meeker et al (2007) describe a study of the effectiveness of the Lincoln Electric Miniflex Portable Fume Extractor.  Use of the Miniflex resulted in a 75 percent reduction in manganese exposures when used in an experimental setting and a 53 percent reduction when used in a field setting.  Meeker et al (2010) report mean breathing zone Cr (VI) concentrations were reduced by 55 percent and to less than the REL when LEV was used in an experimental setting, compared to no LEV use.

In a limited study paid for by Sentry Air Systems, Inc., RF Adams & Associates, Inc. measured a 97 percent reduction in a welder’s exposure to hexavalent chromium while using a Sentry fume extractor (Model 300-WFE) during MIG welding of stainless steel.

An unpublished report (Meeker & Susi, 2013) on the evaluation of the Trion Air Boss One Man Portable HEPA Air Cleaner indicates that it may be effective in reducing hexavalent chromium exposures during welding of stainless steel.  Manganese exposures were higher when the air cleaner was not used but the difference was not statistically significant for manganese, nickel or iron concentrations while welding.

Vacuum fume collectors with HEPA filtration can have either positive or negative effects on productivity, but definitely improve the quality of the work by removing large amounts of welding fume, which allows for a cleaner environment for operators.  In some cases, particularly where work is intermittent or in an area with general ventilation, use of fume collectors with HEPA filtration may reduce the need to wear a respirator, and for an employer to develop a respiratory protection program.  In areas where welding may occur far above the ground or in small spaces, providing a fume collector may be difficult, which can decrease productivity.

Ventilation for construction tools is often misunderstood.  There are additional conditions and practices that can improve the performance of fume collectors and reduce welding fume exposure:

As is the case with any construction equipment, users should follow manufacturer’s safety recommendations and comply with any applicable local, state or federal regulations.

OSHA, under 1926.353(a)(3), requires that local exhaust ventilation for welding consists of  “freely movable hoods intended to be placed by the welder or burner as close as practicable to the work. This system shall be of sufficient capacity and so arranged as to remove fumes and smoke at the source and keep the concentration of them in the breathing zone within safe limits.”  Applicable limits are found in Subpart D. OSHA, under 1926.353(a)(4), does not require that the exhaust air be filtered: “Contaminated air exhausted from a working space shall be discharged into the open air or otherwise clear of the source of intake air.”

OSHA’s new hexavalent chromium standard requires under 1926.1126(e)(1) that “the employer shall use engineering and work practice controls to reduce and maintain employee exposure to chromium (VI) to or below the PEL unless the employer can demonstrate that such controls are not feasible.” This means that welding or cutting where hexavalent chromium is present should include local exhaust ventilation.