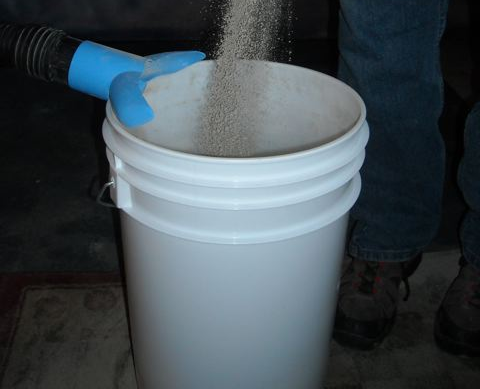 A bucket shroud clipped on to a mixing bucket captures airborne silica and other dust at the mixing source.

Airborne dust generated when bags of dry mortar, grout, cement, or joint compound are emptied into a bucket may contain high levels of crystalline silica and create a hazard for everyone in the vicinity.  A bucket shroud that snaps onto the mixing bucket and attaches to a vacuum with a disposable filter (a high efficiency particulate air - HEPA-filter is recommended when practical) can keep this dust from becoming airborne.  The shroud evenly distributes the vacuum's suction so that as the materials is poured the dust is captured and transported through the hose into the vacuum's bag or reservoir.

The Beaton Innovations Wale Tale bucket shroud is an example of a commercially available bucket shroud that along with a compatible vacuum can be used to capture dust before it become airborne.  The WaleTale has a vacuum port diameter of 2.5 inches and clips on to the rim of a 5, 3-1/2 or 1 gallon mixing bucket.  The dust is drawn into a 2.5 inches opening on the shroud, through the hose and into the vacuum.  The WaleTale is compatible with several different vacuums including those listed below and approved by the manufacturer:

Inhaling silica dust may cause silicosis or lung scarring with prolonged exposure.  Silicosis is an incurable, sometimes fatal, disease.  Exposure to silica also causes lung cancer and other lung diseases including chronic obstructive pulmonary disease (COPD) and tuberculosis, and has been linked to renal disease and rheumatoid arthritis.  A report by OSHA noted that "silica dust can be generated when materials such as ceramics, concrete, masonry, rock and sand are mixed, blasted, chipped, cut, crushed, drilled, dumped, ground, mixed or driven upon." (OSHA Controlling Silica Exposure in Construction - 2009).

When a vacuum system is used to capture silica and other dust at or very near the source, dust concentrations in the worker’s breathing zone and exposures are reduced.  In some cases, particularly where work is intermittent or in an area with general ventilation, use of dust collectors may be adequate to reduce the need to wear a respirator, and the need for an employer’s respiratory protection program.

The manufacturer states that the WaleTale "eliminates dust from mixing mortar and grout in buckets... [and] will not allow dust to escape the top of the bucket."  In addition, studies of the use of vacuums with other tools during much higher dust generating tasks have been found to be effective in reducing exposures.
There have not been independent published studies measuring the exposure of construction dust and silica exposure while using a bucket shroud with a vacuum dust control.  However, with concrete cutting generating more quartz level than mixing concrete (Silica Dust Exposures During Selected Construction Activities, Flanagan), health and safety experts believe that workers can have a more substantial reduction in dust exposure - if not equal - when using a bucket shroud with an effective vacuum dust control.
For example:  A 2009 study, “Engineering Control Technologies to Reduce Occupational Silica Exposures in Masonry Cutting and Tuckpointing”, found respirable silica levels were reduced by 96% with the use of the vacuum while cutting block.   Average exposure with use of the control was 0.11 mg/m3 or just over the OSHA Permissible Exposure Limit (PEL) of 0.1 mg/m3 and roughly two times the NIOSH Recommended Exposure Limit (REL) of 0.05 mg/m3.  Respirable silica levels were reduced by 91% when cutting brick with an average exposure of 0.08 mg/m3, which is below the PEL but over the NIOSH REL.  The results were based on data collected in 2006 using the Bosch saw and an earlier version of the Bosch vacuum described earlier.

NIOSH found similar results in a separate 2007 study, “In Depth Survey of Dust Control Technology for Cutting Concrete Block and Tuckpointing Brick,” which was based on data collected in 2004.  This study found respirable silica exposures were reduced by 95% when cutting block, and noted that dust levels were reduced by maintaining the saw's blade depth to the minimum necessary to make the cut.